Rebuild and Replace worn out hinge. 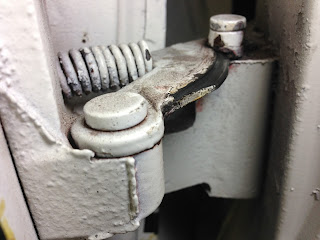 The driver’s door lower hinge on my 67 Mustang is worn out. To the point that the door will no longer stay open. The metal bar that is supposed to glide on a roller has worn deep into the roller making it no longer function. In fact the bar has been worn to a sharp point and I am sure it is now cutting into the pin that holds the roller in place.


Some repairs have a story, and rebuilding the hinges on my 67 Mustang is one of them.

First, my car is an early 67 so it has the cast iron hinges, not the stamped steel hinges Ford started using mid-year. They sell rebuild kits for the hinges, but after watching a You Tube video on what it takes to rebuild a hinge I was skeptical that this was something I could do in my garage. The guy in the video had to weld up a special tool to extract the pin the roller is on as it does not go all the way through the hinge so cannot be hammered out!

I found a set of hinges for sale on Ebay and placed a bid, thinking I would rebuild them and if I damaged them, no big deal the car still has a working hinge, although very worn out. I won the auction and was very pleased to find they were in very good shape, in fact the driver’s door was slightly worn but functional, and the passenger hinge was like new! So only the one driver’s door hinge needs to be rebuilt. 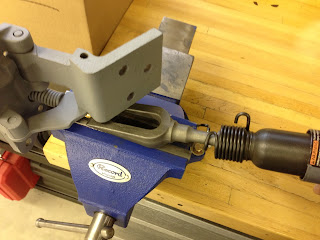 Getting the spring off was no big deal, I wrapped it with bailing wire and tightened it as much as I could with plyers and it came out. The pins came out easy using a punch and hammer, all except for the one pin with the roller that had no way to get behind it. I cut the roller off the pin being careful not to cut the pin, I then placed the pin in the vice and really cranked the vice down on the pin. I was then able to use my air hammer with the ball joint separator fork to drive the hinge up removing the pin. The photo on the left was staged to show an example using the passenger side hinge, but as I was writing this I noticed someone  has drilled a hole in it to allow the pin to be driven out. That’s an option to consider.

So the real problem for me was attempting to put the new pin with the roller back into the hinge. I found that in hammering the pin into the hinge the pin would expand or crush preventing the roller from turning. I destroyed two pins and rollers before I was able to get the pin in without damaging the ability for the roller to turn smoothly.  I accomplished this by slightly reaming the hole with a drill bit making the pin go in a little easier. 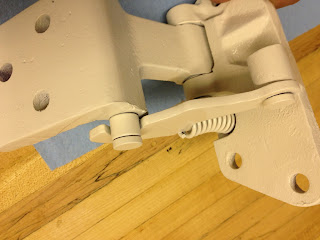 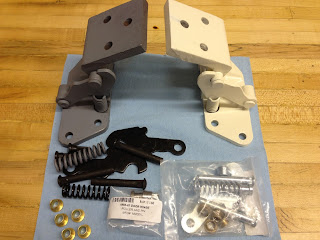